IN 2020, the usually polite and conservative diplomats from the People’s Republic of China (PRC) attracted attention around the world for breaking form. ‘Wolf warrior diplomacy’ is a term used to describe the newly assertive and combative style of Chinese diplomats, in action as well as rhetoric. It is not the only diplomacy-related term that China became famous for this year; there was also ‘mask diplomacy’ (the shipment of medical goods to build goodwill) and ‘hostage diplomacy’ (the detention of foreign citizens in China to gain leverage over another country). Previous years brought us ‘chequebook diplomacy’ (aid and investment to gain diplomatic recognition vis-à-vis Taiwan) and ‘panda diplomacy’ (sending pandas to build goodwill). Wolf Warrior 战狼 was a popular Chinese film released in 2015. It was followed by a sequel, Wolf Warrior 2, which became the highest-grossing film in Chinese box office history. They were both aggressively nationalistic films, comparable with Hollywood’s Rambo, portraying the Chinese hero as someone who saves his compatriots and others from international ‘bad guys’, including American mercenaries. The tagline of both films was ‘Whoever attacks China will be killed no matter how far away’ 犯我 中华者, 虽远必诛. Wolf Warrior 2 ends with this message on screen: ‘Citizens of the People’s Republic of China. When you encounter danger in a foreign land, do not give up! Please remember, at your back stands a strong motherland.’

Wolf warrior diplomacy conjures up images of diplomats as ‘wolf warriors’ — not afraid to pull punches. Chinese officials themselves reject this term, with the Global Times saying China, which makes ‘a reasonable but powerful counter-attack only when being attacked’ is more like Kung Fu Panda, while wolf warrior diplomacy is more of a ‘US trait’.1 However it is characterised, the way Chinese diplomats operate reflects the attitude to diplomacy and foreign affairs of the leadership of the Chinese Communist Party (CCP). The discretionary power of even the top foreign policy bureaucrats and diplomats is relatively limited in the Chinese system.

Under President Xi Jinping 习近平, Deng’s strategy of ‘hiding our capacities and biding our time’ 韬光养晦 has given way to ‘striving for achievements’ 奋发有为 and ‘major country diplomacy with Chinese characteristics’ 中国特色大国外交. An increasingly powerful China, having risen in status and confidence, is ready to take centre stage in international affairs and proactively and firmly advocate for its interests, in the manner of a ‘major country’.

From China’s perspective, this implies that Chinese officials should be able to act like US ones, even taking cues from President Donald Trump and Secretary of State Mike Pompeo. Chinese diplomats are no longer hesitant to be assertive with Western diplomats and audiences.
Their new-found combativeness is most evident on Twitter, a platform banned in China but used by many Chinese diplomats to communicate with people outside the ‘Great Firewall’ — a name given to China’s multifaceted system of Internet censorship by Geremie R. Barmé and Sang Ye in an article they wrote for Wired magazine in 1997. Hua Chunying 华春莹, Director of the PRC’s Foreign Ministry Information Department since July 2019, joined Twitter in February 2020. In July, she fired off:

Is it Navarro or #RonVara who’s claiming that #TikTok data goes right to Chinese military & the CPC? Any evidence? No? Just a new entry on his list of shameless lies. The #US boasts of its strong values, yet it fears a fun app popular with youngsters. When did it become so fragile?

If Hua’s style fits the stereotype of ‘wolf warrior’, she was ahead of the curve; in 2015, as the department’s deputy director, she batted away a US plea to release detained human rights lawyer Pu Zhiqiang 浦志强 by saying: ‘Some people in the United States have hearts that are too big and hands that are too long; they always want to be the world’s policeman or judge.’

Perhaps the most famous ‘wolf warrior diplomat’ on Twitter is another Foreign Ministry spokesperson, Zhao Lijian 赵立坚. Back in July 2019, while he was a minister counsellor of the Chinese Embassy in Islamabad, he engaged in a heated online dispute with Susan Rice, former US national security advisor, saying to her:

I am based in Islamabad. Truth hurts. I am simply telling the truth. I stayed in Washington DC 10 years ago. To label someone who speak[s] the truth that you don’t want to hear a racist, is disgraceful & disgusting.

He was promoted to a deputy director position in the Foreign Ministry shortly after. In 2020, he shared a conspiracy theory from a known conspiracy website that COVID-19 had in fact originated in the US. He also shared a controversial image featuring an Australian soldier. The Australian Prime Minister reacted strongly to this tweet by holding an emergency press conference to condemn Zhao.

‘Wolf warrior’ rhetoric is popular inside China among the extreme nationalist voices often found online. These typically young voices have long called for Chinese officials to be less ‘submissive’ in the international arena, even joking that diplomats should be given calcium tablets so they can grow some backbone.

Unsurprisingly, the same rhetoric has not played well outside China, contributing to negative impressions of the PRC and weakening China’s soft power appeal. An internal report by the China Institutes of Contemporary International Relations, a think tank affiliated with the Ministry of State Security, warned of anti-China hostility due to the coronavirus outbreak. A Pew survey conducted from June to August 2020 found that unfavourable views of China reached historic highs in 2020 in advanced economies such as Australia, some European countries, and Japan. In Australia, 81 percent now ‘have an unfavourable opinion of China’, compared with 40 percent just a year earlier.

In a year of crisis, in which many Chinese people were shaken by government cover-ups and the persecution of whistle-blowers in the early stages of the pandemic, the Party may have purposefully sought to channel people’s anger towards external targets. Yet, by the second half of 2020, the ‘wolf warriors’ had largely retreated from the diplomatic sphere, perhaps heeding the advice of an older generation of diplomats who have indirectly if pointedly criticised these combative tactics. Fu Ying 傅莹, a former vice foreign minister and ambassador to Australia, wrote in April that diplomats ‘should adhere to the spirit of humility, inclusiveness, and learning from others’.2 Shi Yinhong 时殷弘, an international relations professor in China, said of China’s diplomacy efforts this year, ‘they are being done too hastily, too soon and too loudly in tone’.3 The Chinese Ambassador to the US also called the conspiracy theory promoted by Zhao ‘crazy’. But near the end of the year, ‘wolf warriors’ seemed to have enjoyed a resurgence, as demonstrated by Zhao’s tweet of the controversial image.

The antagonistic antics of the ‘wolf warriors’ do not accord with Xi’s rhetoric of ‘win-win co-operation’ and his much-promoted ‘community with a shared future for mankind’. Instead, they give us a taste of China’s rising ambitions on the international stage and perhaps also reveal the increasingly contradictory goals of foreign policy in Xi’s China. 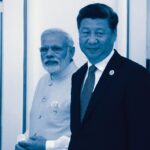