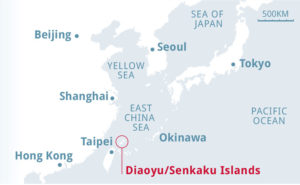 The Diaoyu Islands (Diaoyudao 钓鱼岛), known as the Senkaku Islands (Senkaku shoto¯ 尖閣諸島) in Japan, are a group of uninhabited islands located in the East China Sea northeast of Taiwan. Records of the islands’ existence date back centuries. The Chinese claim they have been under Chinese sovereignty from the fourteenth century, but Japan formally annexed them in 1895 following the Sino–Japanese War of 1894–1895. Private interests owned the larger islands (the site of a failed bonito-processing plant) until the Second World War. The United States held custody of them until 1972, during which time they were used for bombing practice, returning them to Japan despite China’s protests. The Kurihara family has been the nominal owner of the three largest islands since the 1970s. A proposal by the Mayor of Tokyo in April 2012 to buy back the islands, found in 1968 to be close to potential oil reserves, sparked the latest diplomatic battle between Japan and the People’s Republic (with Taiwan a third player) over the question of sovereignty. Below is a brief timeline covering the progress of the dispute over the last year:

7 July
Japanese Prime Minister Noda Yoshihiko declares that the national government will consider purchasing and nationalising the islands. A budget is prepared.

27 July
The Tokyo government places an ad in the Wall Street Journal asking for US support in its bid to purchase the islands.

15 August
The Hong Kong-based Action Committee for Defending the Diaoyu Islands lands seven activists from the Mainland, Hong Kong and Macau on the largest island. The Japan Coast Guard detains fourteen Chinese nationals (those that landed and the crew on the boat) and repatriates them several days later. Mainland reports on the incident prominently feature a photo of the landing but tend to crop out the Taiwan Republic of China flag carried by one of the activists.

16–19 August
Small-scale demonstrations break out across China condemning Japanese imperialism and calling for the return of the Diaoyu Islands. In Shenzhen, some protesters smash Japanese cars and vandalise shops selling Japanese brands.

19 August
Ten Japanese citizens land on the largest island and tie a Japanese flag to the lighthouse.

3 September
The Japanese government enters into negotiations with the Kurihara family, the nominal owner of the three main islands; it is prepared to spend 2.05 billion yen (roughly US$21.2 million).

9 September
At an informal APEC leadership conference, Hu Jintao talks with Noda Yoshihiko and tells him that China considers any Japanese purchase of the islands illegal and illegitimate.

17–18 September
Police and paramilitary exercise more visible control over the protests, protecting consulates and arresting perpetrators of violence and vandalism. In Beijing, protesters block a car carrying the US Ambassador Gary Locke from entering the Japanese embassy.

21 September
China’s State Oceanic Administration and the Ministry of Civil Affairs release a list of standardised names for the islands’ geographic features.

25 September
The State Council Information Office releases the white paper Diaoyu Dao [Islands], an Inherent Territory of China and, on 28 September, publishes it in pamphlet form in English, Japanese and Chinese. In the area around the islands, seventy-five fishing boats from Taiwan clash with Japanese ships using water cannons and loudspeakers.

January 2013
Japan sends two F-15 fighter jets to the East China Sea in response to what it claims was a sighting of Chinese military planes there. China subsequently sends two J-10 fighter jets to the area. A Chinese naval vessel directed fire-control radar at a Maritime Self-Defense Force destroyer near the disputed islands and this was admitted in March.

23 April
Ganbare Nippon dispatches ten boats carrying about eighty activists to the islands, but they are escorted away by Japan’s Coast Guard before they are able to land. China increases the number of its ships in the surrounding waters to eight.

8 May
The People’s Daily publishes an op-ed by China Academy of Social Sciences academics Zhang Haipeng and Li Guoqiang calling for a reassessment of Japan’s sovereignty over the Ryukyu Islands, which includes Okinawa (but not the Diaoyu/Senkaku Islands).

Forum: Counting and Corruption
Party Policies From One to Ten
The Top Twenty People: Successful and Distasteful
Own Goal: Football in China
The Ugly Chinaman

Forum: Borderlands and Cutting Edges
Patriotism and its Discontents
Civility Across the Straits
The Minorities: Civilised Yet?
Hot Topics in 2012
Leading Science and Technology Stories

Forum: Spoken and Unspoken
An Open Letter to a Nameless Censor
The Global Times (Huanqiu shibao 环球时报) in Retrospect
Microbloggers, Conversations and Memes