The Fourth of May marks China’s annual National Youth Day 五四青年節. It is ostensibly a time to celebrate the enthusiasm and independent spirit of youth. It commemorates the progressive, anti-imperialist student activists who, in 1919, led a national movement to protest against the unfair treatment of the Republic of China at the Versailles Peace Conference. Every year since the student-led protest movement of 1989, the weeks leading up to 4 May have been a time of heightened political anxiety.

On 4 May 1919, more than three thousand students from thirteen universities in Peking gathered in the area in front of Tiananmen Gate (at the time there was no square as such) to protest imperialist aggression, in particular the Versailles Peace Conference which proposed allowing the Japanese Empire to occupy former German imperial concessions in China. Together with attempts to ‘modernise’ Chinese culture through language and educational reform that had developed since 1917, this became known variously as the New Culture Movement 新文化運動 or the May Fourth Movement 五四運動. Cultural anxiety, intellectual foment, economic stress, political fragmentation, and continued imperial aggression, combined with enthusiasm following the creation of the Soviet Union in the wake of the October Revolution of 1917 to contribute to the founding and initial flourishing of the Chinese Communist Party in 1921.

Today, May Fourth as commemorated in the People’s Republic of China is entwined with the distorting history of the Communist Party. The demonstration at Tiananmen, 4 May 1919

Unfortunately, after the May Fourth Movement, as both the Nationalists and the Communists adopted Soviet-style organizational methods and party discipline under the tutelage of the Soviet Union, the goal of ‘healthy individualism’ was abandoned for that of collectivism. This foreign import brought disaster on China, for it stifled intellectual liberation. Hu Shih recalled:

‘The iron-fisted discipline introduced from the Soviet Union was excessively intolerant; it outlawed heterodox opinion. It was diametrically opposed to the liberalism we had advocated from the inception of the May Fourth Movement.’

And so it was that both the Bolsheviks and the fascists embarked on the path of collectivization, diverting China from the individual and intellectual liberation of the New Culture Movement.

The theme of the New Culture Movement was ‘enlightenment’, intellectual and cultural self-renewal, and self-transformation. The call of the May Fourth Movement was for ‘national salvation’, its thrust was primarily political, and it led people to join parties for self-benefit. Renewal and transformation became something to be imposed on others. The feeling that national collapse was imminent sent the whole country into a frenzy…

After thirty years of activism [from 1919 to 1949], we won back Taiwan and lost Outer Mongolia (a territory forty-four times larger than Taiwan). We invited the Soviet wolves right into our homes and repaid the cruelty of the Japanese with kindness. Then, with the nation covered in wounds [from the war], the right-wing fascists in the Nationalist Party fled to Taiwan and the left-wing Bolsheviks of the Communist Party took over the mainland.

This article is adapted by the author from his essay, ‘May Fourth at Ninety-nine — Watching China Watching (XXII)’, published on China Heritage on May 4, 2018. 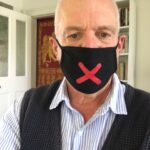 Geremie R. Barmé was the founding director of the Australian Centre on China in the World at the Australian National University. He is an emeritus professor and editor of China Heritage (https://chinaheritage.net).