Experts have long warned that bilateral and national-level healthcare approaches to addressing global health pandemics may be ineffective, due to weaknesses in disease detection and prevention systems, and poor coordination in effective disease control and prevention strategies. The COVID-19 outbreak has exposed these weaknesses in developed and developing countries alike. China’s announcement in August of its intention to fast track the construction of Africa’s Centre for Disease Control and Prevention suggests that Beijing is attempting to respond to the urgent demand for continental-wide health initiatives in Africa.

China’s health assistance to African countries dates back to the 1960s when a team of Chinese medical experts and medical supplies were sent to Algeria, as part of its health aid efforts to assist the country in its fight against French imperialism.

Decades later in 2006, China’s health aid to Africa became embedded in “China’s African Policy”, which indicated that China “would continue to send medical teams and provide medicines and medical materials to African countries, and help them establish and improve medical facilities and train medical personnel.” Through such bilateral frameworks, China has collaborated with African countries to support the fight against infectious diseases including “malaria, schistosomiasis, Ebola, Tuberculosis, HIV/AIDS, neglected tropical diseases (NTDs) prevention, and control.”

By 2016, China had contributed to the construction of 27 hospitals in a dozen African countries. In early 2020, the Chinese Ministry of Foreign Affairs reported that China had sent 21,000 trained medical teams to Africa, who treated over one-quarter of the African population (221 million patients). As part of its aid package to assist African countries to combat the coronavirus, China has provided  “5.4 million face masks and over a million test kits and thousands of protective suits to distribute to all countries [that respect China’s ‘One China Policy’] in Africa.”

While commending China’s health assistance to Africa, Mia Shuang Li and her colleagues at Columbia University pointed out in 2016 that China lacked a cohesive and coherent health strategy towards the continent, limiting the effectiveness of its health assistance. They attributed this poor coordination to the decentralised system through which foreign health assistance is provided to African countries.

The poor coordination of Chinese health assistance in Africa has been exacerbated by resource challenges and limited capacity for disease surveillance, control and prevention across the continent. The outbreak of COVID-19 has exposed deficiencies in disease detection facilities and poor coordination in disease control and prevention due to poorly equipped laboratories, inaccessibility to data, and inexperienced staff — thus revealing the limits in China’s approach to bilateral health aid policies to Africa in the past.

In 2016, reeling from the devastating health effects of the Ebola virus, African heads of state, through the African Union (AU), created Africa’s Centres for Disease Control and Prevention (Africa’s CDC) as a platform for Member States to share and exchange knowledge and lessons from public health interventions, and to strengthen the continents’ response to global health threats. In this context, it has been welcomed by health experts and institutions.

Through its US$150 million COVID-19 response fund, and by providing materials and training personnel to member states, the CDC has played a commendable role in supporting AU member states in fighting the COVID-19. But the agency continues to face resource constraints that limit its ability to effectively execute its plans.

In June 2019, the AU and Ministry of Commerce of China signed a Memorandum of Understanding (MOU) allowing China to build Africa CDC Headquarters. According to the MOU, the $80 million facility will have a “fully furnished emergency operation center, a data center, a laboratory, a resource center, briefing rooms, a training center, a conference center, offices, and expatriate apartments”.

The Chinese government’s decision to build the headquarters of Africa’s CDC, and Xi’s personal backing to fast track the construction of the headquarters during the Extraordinary China-Africa Summit on Solidarity Against COVID-19 in June this year,  are positive signs that China recognises the need for a cohesive, coherent and multilateral health strategy in Africa, and the CDC seems to be the right agency for this purpose.

Yet the Trump Administration has derided China’s funding and construction of the building. An Administration official told the Financial Times in February this year that China’s construction of the headquarters “is a threat to Africa. Africa has vast amounts of genomic data and the Chinese want to build the CDC to eventually steal the data from all the other centres”.

It is plausible that China’s decision to build this Centre is driven by diplomatic and geopolitical motivations, including access to data. However, according to Foreign Ministry spokesperson Hua Chunying, “the 2014 West Africa Ebola epidemic had revealed the poor condition of Africa’s public health system, and Africa hoped that the international community would help it build the Africa CDC”. In other words, China maintains that its motivations are very different to the ones claimed by President Trump.

Furthermore, as with other facets of China’s interactions with Africa, Beijing’s health policy towards Africa is also a reflection of its domestic healthcare history. In this case, China has drawn from its experience with Severe Acute Respiratory Syndrome (SARS) between 2002-2004. China’s own early experiences during the outbreak revealed to Beijing the importance of effective, well-funded centralised agencies.

Following the SARS outbreak, Beijing established the China Information System for Disease Control and Prevention in January 2004, which hooks up hospitals and clinics nationwide and reports outbreaks in real time. Since then it has set up specific mechanisms for new pneumonia strains.

Furthermore, in the aftermath of the SARS, China saw the need for multilateral health cooperation, especially after being criticised for blocking a team of World Health Organization experts from entering Beijing in February 2003 during the height of the outbreak.

As Lai-Han Chan at the University of Technology, Sydney has noted “SARS not only exposed a fundamental shortcoming of China’s public health surveillance system …[it] also forced China to realise that, in the era of globalisation, public health is no longer a domestic, social issue that can be handled at [the] state level.”

COVID-19 has brought to the forefront the challenges of bilateral health initiatives in boosting Africa’s healthcare systems, and their responses to global pandemics in particular. While open to several interpretations, China’s support for Africa CDC is likely driven by its experience of  past pandemics, and its desire to play a positive role in alleviating the devastation of the current one in Africa. If this latest move proves effective, COVID-19 may offer the (tiny) silver lining of opening up global conversations about the challenges of providing bilateral health assistance across the vast African continent. 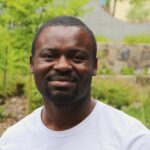 Beyongo Mukete Dynamic is a research officer at the Australian Centre on China in the World, Australian National University.