People’s Daily: 李克强坦陈“稳中有难”彰显中国底气与信心 (Premier Li Keqiang admits that ‘there are difficulties even in stability,’ demonstrating China’s stamina and self-confidence.)

China has fended off the major risks to its financial system while its economic prospects remain positive, Premier Li Keqiang said on Wednesday, as he tried to reassure global markets that Beijing can keep its economy on track and stock markets in check.

“The government took measures to stabilize the market and prevent risks from spreading, we have forced out the possibility of any systemic risks,” Li said during a speech at the World Economic Forum, the Switzerland-based corporate think-tank which runs the Davos summit of world leaders.

Viral on WeChat: 被公安人员带走后必备法律常识 (Legal facts to know in case you are detained by public security.) 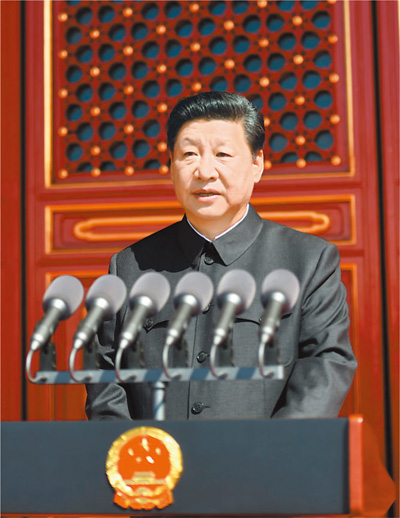 Xi Jinping addresses China and the world during the military parade to commemorate the 70th anniversary of the defeat of the Japanese. Photo: People’s Daily.

People’s Daily: 习总书记对净化政治生态提了哪些要求？(What requirements has Xi Jinping put forward for cleaning up the political ‘ecology’ of the country?)

China in the world

Sina News Center: 被IS扣押中国人质疑为樊京辉 在京从事广告行业 (Chinese man held for ransom by IS suspected to be Fan Jinghui, a Beijing resident who once operated an advertising company.)

One Belt, One Road

People’s Daily: 中纪委：红色通缉令百名外逃腐败分子已有10人归案 (Central Commission for Discipline Inspection: 10 corrupt officials who had fled overseas have been brought to justice, of the 100 individuals on the corruption ‘red list.’)

People’s Daily: 中纪委：红色通缉令百名外逃腐败分子已有10人归案 (Central Commission for Discipline Inspection: 10 corrupt officials who had fled overseas have been brought to justice, of the 100 individuals on the corruption ‘red list.’)

People’s Daily: 李克强坦陈“稳中有难”彰显中国底气与信心 (Premier Li Keqiang admits that ‘there are difficulties even in stability,’ demonstrating China’s stamina and self-confidence.)

About The China Story

The China Story Project is a web-based account of contemporary China created by the Australian Centre on China in the World (CIW) at the Australian National University in Canberra, which has the most significant concentration of dedicated Chinese Studies expertise and is the publisher of the leading Chinese Studies journals in Australia.

A guide to the major parts of the website is at right. For more about The China Story, and the people behind it, please see this page.

This website and the China Story Yearbook are open-access materials published under a Creative Commons 3.0 Unported license.

We encourage the widespread circulation of the material published on this website. While all content may be used and copied, we request that you credit The China Story Project and provide a link to:
www.TheChinaStory.org.

We occasionally publish images from other websites; we do this under the terms of the Digital Millennium Copyright Act; if you are a rights owner and object to our use of an image, please let us know via our contact page.

Australian Centre on China in the World 中华全球研究中心/中華全球研究中心